When solving these problems, learning by doing is much better than learning by reading. I encourage to you read only as far in the solution as you need, then trying to solve the problem. If you get stuck, try reading a little further. And of course, let me know if you find a better solution!

How to win on, "The Price is Right"

Problem:  In the popular game show, "The Price is Right," four contestants try to get nearest to the actual retail price, without going over, for a presented product.  The contestant who gets closest wins the round gets to compete in a pricing game to win additional cash and prizes.


What is the optimal bid strategy for each of the contestants?


Is the optimal strategy commonly pursued and how can you tell?


Solution:
We'll get to the solution in a sec, but if you watch the show, this is one of the most exciting parts.  After the first round, a new contestant joins three existing ones with the famous phrase, "Come on down, you're the next contestant on The Price is Right."  An enthusiastic college student, marine, etc. comes running down, excited to play and win prizes.


Then, a prize is brought out and they each try to bid and get closest without going over.  The winner gets to play a pricing game, while the losers must wait and stew and try to win the next game.


Let's start by doing an example where there are four bidders, in order:  Alice, Bob, Candice and David.


A prize is brought out -- let's say a portable jacuzzi.  How much should each person bid? 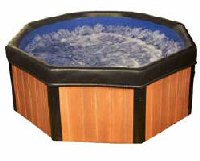 
How much should each person bid?  (and then we have to go back and account for the complete set of bidders and how bid order affects the choice)


Let's accept a few assumptions to start:
1.  The error range on price is quite high, probably +/- 30% and equal on both the high and low side.
2.  The likelihood of anyone correctly guessing the correct amount is low (approximately 1 in several hundred if we accept assumption 1)
3.  Everyone acts rationally to maximize his/her choices (which admittedly doesn't always happen)
4.  All contestants are equally good at guessing prices (also, not always true)


Well, Let's start with Alice:  One strategy is for Alice to bid exactly $1000.  This has the benefit that if she is right, she immediately wins (and even gets a bonus).


This logic would suggest to bid $1, however there are three more bids coming, and she must assume that they will not be wildly off on the price and they will act rationally.


If he believes that the price is under Alice's he then wants to bid enough under Alice to maximize his range, but not so low that he is likely to be pipped (or have someone bid $1 more than he).


Now, Candice must choose knowing that only one bidder, David, is coming after her.  She actually has a very simple choice to make.  As the third bidder, she must choose if she believe the product's price is either: 1) below the lowest bid, 2) between the two bids, or 3) higher than the higher bid.


In each scenario, she would seek to maximize her chance within the range.  As she knows that David will choose his range optimally, she knows that he will bid $1 over the lowest number that gets him into his range.  So, she simply wants to guess the correct range and hope that David disagrees.


So, the ideal bid strategy depends upon you location.  If you are fist, you should go under, but close enough that your price is not so low you're likely to have a range so big that someone bids $1 more than you.  If you are second, it is a similar concern, but you need to account for the first bid so that you are in your desired range.  Third and fourth bid are automatic about maximizing your range by bidding $1 more than the floor of your range.


Do people do this?
In fact, the results show that people very rarely do this.  If they did, you would see many more bids which were $1 higher than someone else's and many more bids of $1.  While you do see these, you do not see them to the extent you would expect:  at least two such bids per game and always by the third and fourth bidders.


Why not?  There are a two reasons:
- People do not know how to optimize their chances of winning
- Behavioral economics come into play and people do not seek to maximize their chances.  It is considered rude and unsporting to bid $1 more than someone else and try to game ranges and not bid on what you think the price is.  So, people just do as they're encouraged and try to guess the price


Some people just have challenges too with this game.

To help the community, I do one 30 minute interview every week for free for candidates (virtual, over some online coding tools). Email me if you're interested. It's good practice for the kinds of questions you'll get, and I'll give honest feedback as to your skills, likelihood of getting a job, and tips for improving/practicing for future interviews.
I especially like to work with minority candidates, and those looking to make career changes, so please shoot me an email, provide some background, and we'll set up a time.
noah@codewod.com
Also, if you find alternative or better answers to the questions, please let me know and I'll post/credit!